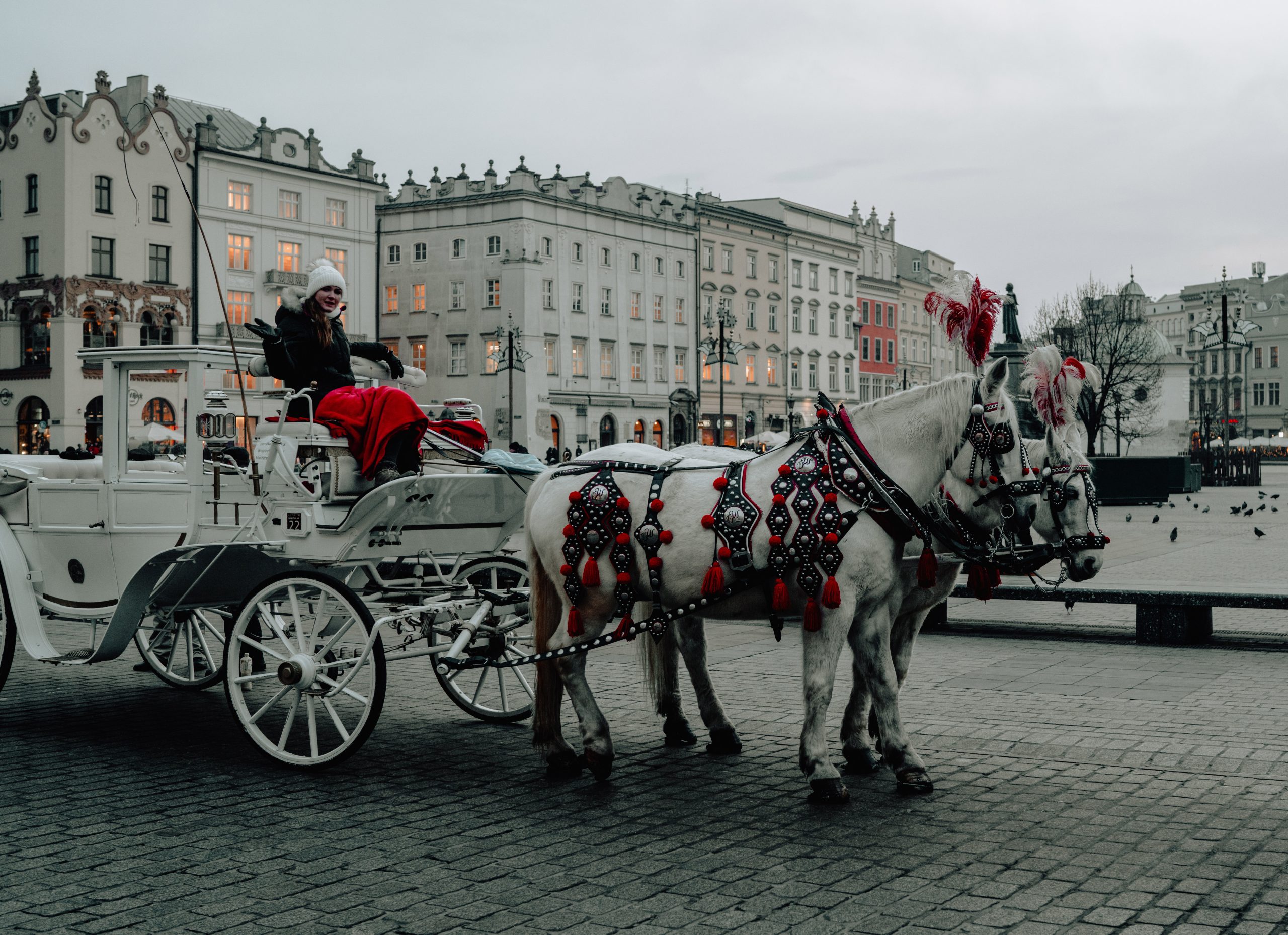 I first visited Kraków when I was five years old. Even though my grandad was Polish, it was our only visit to the country until recently. We decided to book a few days in Kraków just after Christmas and wanted to pack in as much as possible, so we made sure to plan each day.

Kraków is the second-largest city in Poland, located in southern Poland and around 2 and a half hours from the UK via plane. It’s full of amazing architecture, tasty food and lots of history.

Once at Kraków airport we booked an Uber to the centre of Kraków. Uber was incredibly cheap in Poland and it only cost us £6 for a twenty-minute journey.

Our accommodation was an apartment with a balcony over-looking Wawel Royal Castle booked through Airbnb. The host was so helpful and recommended things to do and the best restaurants in the city.

It was early evening when we arrived so we decided to go in search of drinks and dinner. Matt is really into craft beer so we headed toward House of Beer first, where we tried a few Polish craft beers. They had a great selection and everything was so cheap.

After a couple of drinks, we headed back towards the main square to find somewhere for food. We ended up in a place called Gruzinskie Chaczapuri, just off the main square. The restaurant was a traditional Polish place that also offered Georgian dishes and the food was really tasty.

Of course, I had to have some pierogi, so we shared a plate to start with and for main I had bigos. Bigos is a stew that usually consists of meat and sauerkraut. This particular one was served in a loaf of bread and was really tasty.

After dinner, we headed back to the apartment and went to bed as we had to be up early the next day.

For our second day, we had booked a tour of both Auschwitz and the Wieliczka Salt Mines. This was booked through Get Your Guide, which is a good site to check out wherever you’re travelling.

A minibus picked us up right outside our apartment in the morning and we headed towards Oświęcim, the town where Auschwitz is situated. There was a small group of us and on the way, the driver put on a film about the liberation of Auschwitz.

Included in the tour was a tour guide for each site and the one we had at both Auschwitz camps was really knowledgeable. She walked us around the camp giving us facts and information and really bringing home the harrowing history of the site.

The first stop was at Auschwitz I. This camp is more of a museum and memorial with exhibitions throughout the old buildings. There are rooms full of the luggage taken from prisoners, hair from their heads being shaved and children’s shoes.

A short bus journey away was the second camp – Auschwitz Birkenau. This is a huge site, which mainly has buildings that you can go in to see how people lived at the camp, like the prisoners quarters, watchtowers and lots of barbed wire fences. It also has a train track running through it, which was used to transfer people into the camp. We were told that most prisoners were out in the cold and snow with no shoes, just in their thin pyjamas and at night sleeping two, three or sometimes more to a bed. Here you could also see where the gas chambers were and there was a memorial to the victims.

Auschwitz is definitely an upsetting place, but somewhere I recommend people visit and somewhere that will definitely have an impact on you. You can hear the history of the place in school and from books, but until you’re standing in the spot that it actually happened, you can’t begin to imagine how horrific it was.

For ever let this place be a cry of despair and a warning to humanity. Where the Nazis Murdered about one and a half million men, women and children, mainly Jews, from various countries of Europe.

After visiting both camps, we got back on the bus and headed toward Wieliczka where the salt mines are located. We were early for our tour, so were taken to a restaurant across the road to get some food and a drink.

The restaurant was Karczma Halit and is a traditional wooden building serving classic Polish dishes. I had pierogi again. This time with various fillings and topped with a bacon and buttery sauce.

After food, we headed across the road to the Salt Mines. Our guide was there waiting and we were handed headsets so we could hear him. Once inside, our group was taken through reception and to the stairs where we descended towards the mines.

There were a fair few steps to walk down, but once we were down there it was relatively flat. Pretty much everything was carved from the salt; the corridors, the ceilings and even the statues, floor tiles and chandeliers! There was a huge chapel, some smaller chapels and also a lake. Photos don’t do it justice, it’s such an amazing place to visit.

At the end of the tour was the gift shop. Located hundreds of metres underground. Here you could buy different salt themed gifts and items, as well as amber jewellery and Himalayan salt lamps.

To go back up to the surface we were put in a tiny and very overcrowded lift. Our bus was waiting for us in the car park and drove us back to our apartment.

Once back in Kraków we went on the hunt for some food and craft beer. After a bit of research, we found a bar near the square called Browar PINTA. It served a great range of beers, some great food and it was a really cosy place to sit for a couple of hours.

We started our last day by going for breakfast in a cafe nearby. NapNap Cafe is just a two-minute walk from the apartment and is a small and homely place selling modern Polish breakfasts and brunch dishes, as well as coffee and hot drinks.

Matt had a cooked breakfast consisting of eggs, beans and sausages, salad, some kind of horseradish sauce and bread and butter. I had waffles with cherries and soured cream. The portions were huge, but it all tasted great and was the perfect meal to start the day.

After breakfast, we headed towards Kazimierz, the Jewish Quarter in Kraków. It was about twenty minutes away by foot. On the way, we walked through the grounds of Wawel Royal Castle.

Wawel Castle’s buildings date from around the 14th century and consists of an assortment of Romanesque, Renaissance and Gothic architecture. We didn’t stay for long, just took a few photos and then left. We did consider paying for a tour of inside the castle, but it was quite expensive, so we continued on to Kazimierz.

Kazimierz was the centre of Jewish Life in Kraków and was destroyed in the second world war. It was rebuilt and is now known as a trendy area of the city and features independent shops, cafes and art galleries. Some of the old buildings are still there, like synagogues, which you can go inside.

We wandered about Kazimierz for most of the day, stopping in a couple of pubs for drinks and looking in the different shops. I came across a really great beauty shop called O Jeju, which sold loads of Korean and Japanese beauty products. I bought a couple of things in there, including a Korean face mask which I love!

We then headed back towards the main square in search for dinner and ended up in the same craft bar as the evening before, Browar PINTA. We had a couple of drinks here and then headed back to the apartment to back ready to leave in the morning.

Kraków is such a great city and a place I’d recommend to everyone. It’s full of history, great sights and it’s incredibly cheap!

Have you ever visited Poland?